The ongoing battle is what everyone is eating for breakfast at our house.  Between my hubby and my grandson, who is here for 2 hours before he gets on the bus. No one knows what they want for breakfast. My hubby goes in spurts of what he wants. For weeks he will want cereal and then when I have stockpiled boxes of cereal he no longer want it. Then he’ll switch to pop tarts for another few weeks and then on to something new. But recently I had a coupon for some frozen breakfast burritos and they were on sale at our Giant so I thought lets see if this will feed the starving in the morning. Well wouldn’t you know they both loved them. Unfortunately, without a coupon and sale they are not the cheapest things to buy.  Straight out of the freezer they run about $6 for 8 burritos. Not a great bargain. So I got to looking at these burritos and thought they would be super easy to make and freeze.  So today was the day. I went to the store to get the extras that I needed. I normally buy corn tortilla’s but they won’t work for freezing so I had to buy some flour tortilla’s.  They were on sale for $1.88 for 20 tortillas. Great deal. Both my hubby and my grandson prefer the sausage burritos so I wanted to get some of the loose sausage to put in them. The Bob Evans sausage was on sale for 2 for $4.  I only bought one because I didn’t want to make to many and then they not really like them. I’ll kick myself later for not buying both. The eggs I already have because a friend give me all the brown eggs I want. The only other thing I needed was some shredded cheese, wax paper and a plastic storage bag. All of which I keep on hand all the time.

The process is really easy. I made a whole dozen scrambled eggs. I mixed some green and red pepper that I had chopped up and in the freezer from last summer. Then I fried the sausage and chopped it up as it fried to make small pieces. Then it is just a matter of making an assembly line and get to work. Each burrito gets 2 heaping tablespoons of the scrambled eggs, 1 heaping tablespoon of the sausage and 1 teaspoon of grated cheese. Roll the tortilla as tight as you can while keeping all the ingredients to one end. Then roll in wax paper. Fold the ends in after rolling. When you have them all rolled. I mark the outside with a marker of what they are, “Sausage, Egg and Cheese”. I let them cool and then pack them in a plastic storage bag.  When they want to eat them I just take them out of the freezer and pop them on a plate, leave the wax paper on them. Microwave for 1 minute. My hubby likes them with some salsa on top. My grandson eats them just like that. Maybe a little more cheese on top for him.

So for $4 I made 20 burritos, that’s 20 cents a burrito. If you need to buy all the ingredients its probably like .40 cents a burrito. Still a lot cheaper than the frozen one from the store. Plus you know what is in your and you can make them to suit everyone in your family.

Hope you like this idea and you give it a try. Let me know how they turn out for you and what creative recipes you put in yours. I may want to try them. 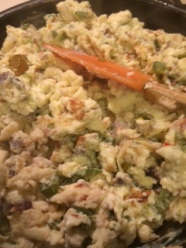 Scrambled eggs with the pepeppers 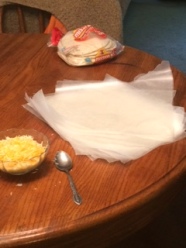 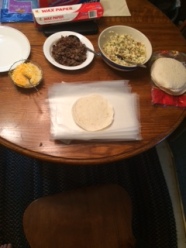 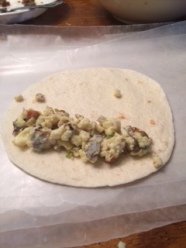 start with filling along end